So the GeekVape Aegis Solo is much smaller than other GeekVape 100W mods, but it still has the same rugged build that makes it waterproof, dustproof and shockproof. The 100W box mod does also carry the GeekVape AS chipset inside that can power it up to 100W. The Aegis Solo box mod starter kit comes paired with the Cerberus sub-ohm vape tank with a glass extender piece, and two X2 Super-Mesh coils both rated at 0.3ohms also in the kit.

A Look Inside the Kit 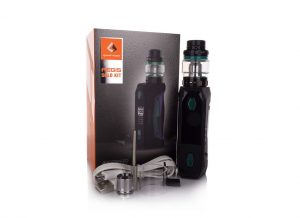 Up Close with the GeekVape Aegis Solo

The new GeekVape Aegis Solo box mod in the starter kit is a shrunken-down version of the much larger Aegis box mod and starter kit. The new device has the same shape and form as the original, with a leather-back-grip, and the 0.96-inch display facing forward. The screen also features the Aegis Solo’s three-button control configuration.

The Solo is thinner than the other Aegis mods with a width of only 41mm (1.6 inches), and standing at just over 86mm (3.4inches). The Aegis Solo is also much more slender, weighing in at 112g or 4oz. The other notable similarity to the original is the build design of the new Solo also makes it as indestructible as the first vape starter kit. 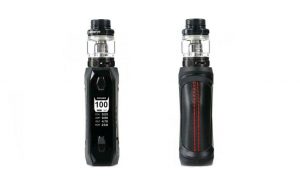 The zinc-aluminum alloy chassis protects the internal AS-100 chipset from water, dust, and shockwaves. All the Aegis mods have the same build features like the LSI silicone seal that protects the circuitry from water (the maximum allowable depth under water is 1 meter or 3 feet).

Even the USB port to charge the battery and install firmware upgrades is covered by a rubber stopper to keep water (or any liquid) out, which is unusual for 100W mods. There is an Aegis logo etched into one side of the device – the side with the USB port – and at the very bottom, like with most box mod starter kits, is the battery bay door that also has a waterproof design.

The door has a depressed handle that users need to remove with the special tool included in the kit, which is unlike any other box mod. They need to insert the device and unscrew the door from the threads. On the top of the mod, there is stainless steel, spring-loaded 510 connection for the Cerberus vape tank or any other 510-threaded vape tank with a diameter of 31.5mm or 1.2 inches across.

Features of the GeekVape Aegis Solo

The GeekVape Aegis Solo kit, as it contains the AS-100 chipset, features a similar display configuration as any other GeekVape mod. The screen display should be familiar to most box mod users, as it shows information like mode, wattage, battery life, coil resistance, amperage, and a vape timer in a top-down screen. 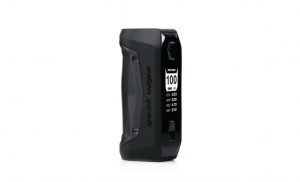 The AS-100 chipset, common to all Aegis mods and kits, can enable wattage, temperature control, variable power curve, TCR, and a full bypass mode. The screen measures 0.96 inches, and it is a good size for this type of mod, although it is a little dark.

Using the screen, and exploring the menus takes only three clicks of the main firing button. Anyone can enter bypass mode, or VPC or temperature control by highlighting the mode button and clicking through the various options.

The Aegis Solo can fire up to 100W, but with only a single 18650 battery, its power limit is not assured. It may be a little less because of the smaller-capacity battery. The functioning of the menu and the chip are both excellent. There were no problems scrolling through the various options. The buttons are responsive, and there was no drag or lag in their performance.

The Cerberus vape tank has been a mainstay of many GeekVape kits since 2017. It is a sub-ohm tank that takes conventional atomizer heads like the two X2 Super-Mesh coils included in the kit. The mesh on these heads are a bit more coarse than other similar designs, and they wrap all the way around the inside. 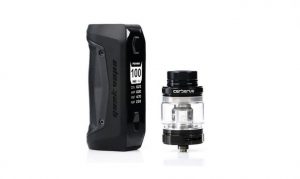 The Cerberus vape tank itself features stainless steel and Pyrex glass components. It has a twist-to-open top cap that reveals the two fill ports underneath to fill the 5.5ml or 4ml glass section. Vapers living in TPD countries receive two 2ml glass piece instead of two different ones.

The drip tip is an 810-style, removable one that is a bit shorter than regular ones, but it has an o-ring inside the top cap (there is no extra drip tip in the kit). The Cerberus tank has dual, bottom, airflow slots that are fully adjustable. There is a protruding, 510 pin on the bottom, so don’t use the tank in the kit with a hybrid mechanical mod.

The Super Mesh, Kanthal mesh-wire coils that come in the kit are rated for between 30-45W, but vape best between 30-40W. The tank is compatible with other mesh-style atomizer heads like the TFV8 Baby coils.

The AS chipset can power the Aegis up to 100W, although the vape did not feel like it got to that level or temperature at least. The X2 coils are best vaped at a lower wattage, of course, around 30-35W and vapers should use a lower-resistance or RDA tank to test out the mod’s capacities.

With the Cerberus tank attached, the box mod still gave off a great vape. The vapor was smooth, staying underneath the 30-40W maximum of the coils, with a very loose draw resistance. The airflow was kept open, and using the TFV8 Baby tank with the accompanying coils was the best way to let the mod fly and vape.

The VPC (variable power curve) feature of the AS chip allowed for a more customizable experience, as there are five different slots for a curve vape that vapers can program. As for the life of the single 18650, keeping below the recommended range of the coil, of 40W, or even a tad above at 50W, the Aegis lasted all day.

The device and battery in the kit may need recharging if the vape mod fires above 50W. The USB charging port should help with that, as well as the 1.5A charging available for the chip, which is somewhere between the slower 1A and the faster 2A.

The GeekVape Aegis Solo vs. the Aegis Mini vs. the Tesla Punk Mini

This mini version of GeekVape’s popular Aegis line of mods has a single, built-in 2200mAh battery that can reach as high as an 80W output. This Aegis Mini vape mod also comes outfitted with the AS chipset that delivers users variable wattage mode, and temperature control, along with bypass. 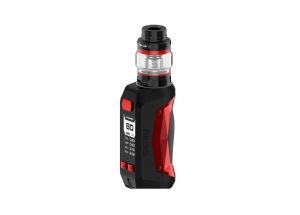 It also comes in a kit with the Cerberus tank. The chip also features several safety features like a 10-second cutoff time, and short-circuit protection. This mini-mod also has the rugged, nearly indestructible build quality of its predecessors as it is waterproof, shockproof, and dustproof.

The Tesla Punk Mini box mod is a single 18650 device with a maximum power output of 85W that comes in a stand-alone kit (no tank). The device uses a three-button control configuration, paired with a 0.96 OLED display to control its various functions. 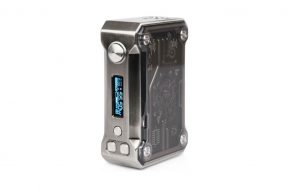 The Punk Mini mod has a zinc alloy chassis with a notable Steampunk design aesthetic. There are two transparent, plastic viewing windows on either side of the mod, where there are also adjustable RGB LED lights. It has a bottom-loading battery bay door and a gold-plated connection up top.

The GeekVape Aegis Solo kit features two high-performance vaping devices. The mod in the kit has a comfortable, ergonomic grip like all the other Aegis mods. Its narrow frame gives it a lightweight, portable feel, and the natural functioning of its control panel make it a joy to use. The Cerberus sub-ohm tank is a good match for the Aegis Solo, as it can handle the mod’s various functions like the 100W output.

The Cerberus tank is also compatible with several different atomizer heads so anyone who wants to push the mod and the AS chip to the limit can do with other coil heads. The mod itself comes in six different colors, and the design accents, like the leather wrap, along with the tightly-sealed interior are all well-done and tasteful.